JANMAC Poll Dorset and White Suffolk stud cleared plenty of cross border hurdles to sell the most rams ever at its 16th annual on-property sale at Goroke, Vic on Wednesday last week, including doubling its previous year’s top price.

Over the years the Hausler family have built up a strong clientele on both sides of the SA-Vic border but being six kilometres outside the 40km cross border buffer zone saw many SA buyers and agents unable to attend.

However holding a pre-sale inspection day at Frances for these SA clients to attend and interfacing the sale with Elite Livestock Auctions enable many of their clients to operate.

The sale topper was sired by Kurralea 234/16 which Janmac bought in partnership with Ulandi Park for $15,000.

Zacman stud’s Samantha Kelly was very happy with their new stud sire.  “We had a limit in mind and went to that, but we thought the ram was well worth it,” she said.

“He was a true-to-type Dorset with nice clean points and good structure and good topline and butt. We looked at him at the open day at Frances and he caught our eye.”

Ten rams are bound for stud duties including lot 10 to Pembroke stud, Telangatuk East, Vic, for $6000.  The stud’s popularity with local producers was evident with three of the largest buyers all from Goroke.

Co-principal Grant Hausler, who runs the stud with his brother Bryce, was thrilled with the result.  “We know we have a good core group of clients but there were a lot of uncertainties with the border restrictions,” Mr Hausler said.

“The top price doubled our previous record and we also had sales at $8000, $6250 and $6000, all above our previous top. We’re stoked.”  There were 41 registered bidders in the crowd and more than 30 on Elite Livestock Auctions.

“There’s no doubt that contributed to the success, particularly on the top end, and I’d expect we’ll continue with that combination,” Mr Hausler said.

Mr Hausler said there was deep quality in the offering which was one of the biggest sales in Vic.  “There were very good buying opportunities at $900-$1000 in the last 30-odd sheep and that was quite deliberate,” he said.

“We’d sooner make sure everyone got a chance to buy rather than worry about the highest average.”

He paid tribute to return clients. “It’s a team effort and we’ve got a strong group of clients, some have been with us for 40 years and they know the sheep work, but we also had some new buyers this time,” he said.

Rodwells Edenhope’s David Hanel said repeat buyers, particularly locals, were a major force in the sale’s success. “They have a lot of local support,” he said.

“The field day in SA certainly helped the interest and enabled SA clients to view the stud and selected rams and then have the confidence to bid online.”

Mr Hanel said the increased stud interest was testament to the work they put in.  “The studs have always been there, but the genetics are starting to flow through and showing on the scoreboard,” he said.

“Considering the conditions we were put under, the rams sold very well, and SA buyers supported the sale very well online. We had five clients bidding in our branch in Naracoorte who bought more than 30 rams,” he said.

The sale was conducted by Nutrien Livestock Naracoorte and Rodwells Edenhope. 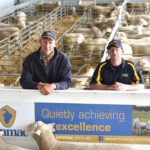 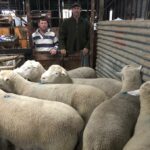